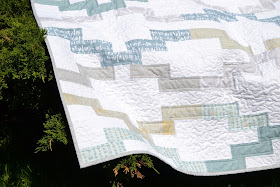 My client was looking for a show-stopping custom quilt for a very close friend's baby shower. I was relieved when she told me she was able to sneak a few clues about baby boy's nursery, which always helps me decide on colours and design, especially when I'm creating for someone I've never met. Quilts can be so personal!


Then, she sent me this picture. And told me that baby's nursery colours are turquoise, grey, and white. Okay, at least I got some colours! But not much to go on, really. So I had to make some extrapolations from this picture of the cushion. Hmm... from this I get geometric, classic, clean lines, with a sophisticated feel. Even the conservative tan wall colour and Burberry-esque plaid on the stool points me in a similar direction, so as long as this picture was taken in my client's friend's house, I think I have a decent starting point. (Or it was snapped in a store as she was shopping and I'm reading wayyy too much into a picture of a pillow.)

To fit with this elaborate backstory that I projected onto a single cushion, I decided on a simple geometric design with a bit of mixing up of prints and textures (my favourite). The Interlock pattern by Amy Friend of During Quiet Time was the perfect design. It can be found in the Winter 2015 issue of Modern Patchwork and Quilting, but Amy was kind enough to let me know that as of November 2015 she will be offering the pattern for sale herself as well, through her pattern shop. (This is the time for a quick side note on how kind and generous even the busiest and most well-known quilters are - within an hour of my posting this quilt on Instagram, Amy herself commented that it was lovely, and let me know that she'll have the pattern for sale in a few months. I love quilters!) 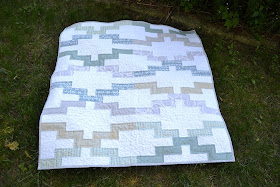 The pattern is for a throw-sized quilt, so for a large baby quilt I reduced it to a 2 x 4 block layout. It ended up measuring about 45" x 48", which is an awkward width for a quilt... juuuuust too wide to fit a single piece of backing fabric. So I used the scraps leftover from the front to piece a 2.5" wide scrappy strip down the backing, which added just the right amount of width. If I were to make this as a baby quilt again, I'd scale down the width of the blocks a bit so that the quilt top would fit a single width of backing piece. I don't mind piecing backings, but with baby quilts it's nice to just get it done simply sometimes, you know? (Although I do think the pieced backing looks great on this quilt.) 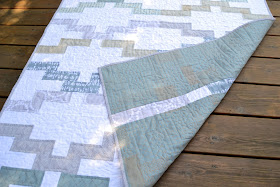 I initially had a hard time finding the right shade of muted turquoise to coordinate with the cushion. And the fact that it was for a boy added another layer of challenge - there are always so many more options that involve florals or more "girly" prints. I spent the better part of an hour at my local quilt shop (the fantastic Greenwood Quiltery) before I settled on this combination of blues and greys from Doe by Carolyn Friedlander, with some grey Widescreen (which I also used for binding), a blue kite tails print from Lotta Jansdotter, and grey Pearl Bracelets from Lizzy House. I initially wanted to mix in some pops of yellow, but decided to be conservative based on my (fairly baseless) assumptions about the quilt's recipient. Hilary from Greenwood agreed (and we had a little too much fun inventing a backstory for these people and what they would like based on their cushion choices...), so we played it safe and stuck with blues and greys. 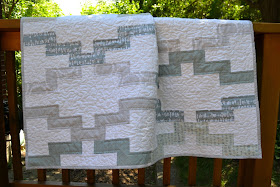 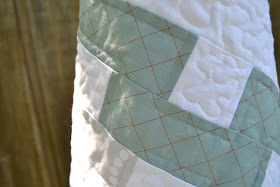 I quilted it with a mix of free motion stippling and straight lines, to soften the strong geometric lines and emphasize the pattern. I waffled a bit on how to quilt it (I always do), but I think it turned out nicely.

The Interlock pattern was well-written, and the quilt was simple to cut and piece and fun to put together. I don't often make the same quilt twice, but I can see myself using this pattern again. With a few changes of colour and fabric, it could look like a totally different quilt... scrappy colourful background with white/grey/low volume lines, anyone? I'm pretty confident that once Amy releases it herself, this one's going to be a huge hit. 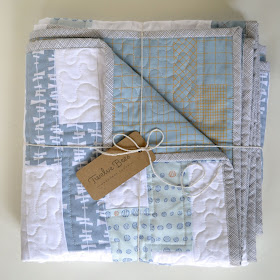 Once it was all finished, I got to tie it up in a pretty package with one of my new tags and give it to a thrilled client (who assured me that her friend would love it - and that if she didn't, she'd gladly keep it for herself!). All in a day's work. :)
Share